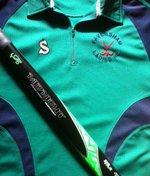 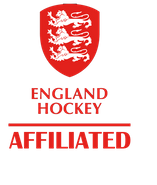 Fav today welcomed Rachel Griffiths back to the team for this home match against Brom Beccs, meaning the Ladies had 3 Mother/Daughter combos playing on the team. A first !
With 3 substitutes the Ladies were full of positivity for the game, and started the game playing well and passing the ball around in a way that was reminiscent of an eleite Team GB squad (!) Capitilising on this the forward line combined to score a goal and for the third game in a row Fav went into half time with a lead.

Following on from previous games luck changed in the second half and with 10 minutes to go a short corner routine from Brom Beccs meant that a shot from the top of the 'D' cannoned off an oppo player standing on the post - who it is fair to say didnt know an awful lot about it !
Fav then gave away a heavily disputed short corner with the home team convinced that a stick tackle had been received on a Fav defender rather than made by one, however the away referee deemed this incorrect. Bowing to officialdom the defenders held this corner out but conceded another short for a foot fault. This one was a bullet from the top of the 'D', the ball hitting the back board and Favs hope of a t least a point fast disappearing.

One day luck will go the Ladies way, lets hope it is next week against Dartford !

The Ladies travelled to Dartford with a team of 11, and started the game off extremely well, the ebb and flow of attacks finally being finished by skipper Clare Smithson.
Burnt Ash didnt take it lying down and pushed onwards, with Fav conceding several short corners, eventually the keeper beaten by a ball diverted from a Fav stick. Another short corner lead to a blast from the top of the 'D' that neither the runner nor the goalie could do anything about.
Second half continued in the same vein with Burnt Ash not really dominating but the luck went their way with another goal.
A hard fought game, Fav aren't playing badly just luck is not going the teams way this season !

The Ladies could not get a team together and had to concede.

The Ladies first away match of the season was against Gravesend, a team played over many seasons by Faversham and always a closely fought, tight match. Fav had agreed to delay pushback by an hour at Gravesend's request and the delay meant conditions were steadily getting worse, with torrential downpours causing flooding on the newly laid all-weather pitch.

Faversham welcomed yet another Mum/Daughter duo playing together for the first time, with Megan Fisher making her Fav debut alongside Mum Becky playing in goal. Megan lined up on the right side of the midfield and settled in quickly, making forays forward and having the confidence and fitness to run back and defend when needed.

Fav were penned back increasingly by a Gravesend forward line unrecognisable from previous seasons; the interplay and strength of passing turning Fav inside out on occasions with shots on target from around the "D". Inevitably Gravesend took the lead with a vicious shot which wrongfooted keeper Becky after hitting a Fav defenders stick. Just before half time a shot came in again which yet again was diverted into the goal by a defenders stick, the rain causing the ball to skid off a surface saturated. 2-0 down but with some positive forward line play and the hope that the worsening conditions would allow Fav to get on the ball and cause their own problems at short corners.

Sadly, the second half continued in the same vein as the first, with the Gravesend forwards running at Fav and the team playing on the back foot. Occasional chances for Fav's own forward line meant there was some hope of getting a goal back, however yet another own goal from Fav meant the scoreline records a loss without the team actually conceding to an opposition goal !

Fav will hope for better luck for next week's home game, gain another week for those recovering from injury and illness and recover from another game to get the fitness levels back up again. Bring on New Beccs !

The Ladies reconvened at Westlands for the first game since the end of October 2020 with a new push back time of 16.15 which, for once, had the Ladies waiting to come onto the field rather than rushing to get off of it !

Starting well, Faversham played some good hockey and had some good forays forward, defended well but were beaten by a shot from one of the K-Sports attacks passing returning 'keeper Lyn Kent at a rate of knots. Fav collectively shrugged their shoulders and pushed on, and earnt a couple of short corners for themselves, one narrowly missing the post. From one of these corners K-Sports broke out and swarmed downfield, this time beating the keeper at the near post.

Fav again came back positively with some lovely wing play from both Shannara and Esme with some great support from Sophie Mears, making her Fav debut. A fantastic shot from Esme halved the deficit and Fav reached half time feeling positive.

Second half started in a similar vein to the first, with both teams playing some good hockey with breaks forward and defending their goals well. K-Sports scored a further 2 goals during the half with their attacks, however Fav just could not get the ball over the line, with the K-Sports keeper closing down each attack well and making some good saves.

A great first game of the season with a scoreline that defies how well Fav played together after what was very nearly a year without hockey. Lots of positives to take into next week's away game at Gravesend, the return of three stalwarts in Sheila, Lyn and Sara; a stunning debut for young Sophie Mears and a proud moment for Mum Liz playing with her daughter in Fav colours for the first time.